Allowing the Space for New Thinking to Come 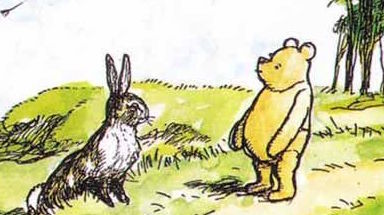 I spent some time letting thoughts come to me this morning.

I’m in the process of refreshing the Doctor’s Transformational Coaching Diploma programme and after several hours of course editing and creativity I needed a break to do some thinking.

I’d been chasing ideas all morning, but they weren’t for being caught, so I took a walk in the sunshine on my own and without any technology.

That was rewarding in and of itself. Connecting with the countryside and the joy of different birdsong and bufferflies on the wing, in all shapes, sizes and colours. I don’t think I ever really heard blackbirds before lockdown. I must have heard them, but it had never really registered how beautiful their song was. I love to hear them now.

The experience put me in mind of a conversation between Winnie the Pooh and Rabbit in ‘The House at Pooh Corner’. The exchange comes on the back of Rabbit overhearing Pooh humming a little hum.

“Did you make that song up?” asked Rabbit.

“Ah!” said Rabbit, who never let things come to him, but always went and fetched them.

What Pooh knew, in his own way, was that our unconscious has a way of allowing things to surface when we’re not really trying, and it’s a curse of our constantly connected lives that we often don’t allow ourselves time to let ideas come. Even when we’re in need of creative inspiration we often, very much like Rabbit, go looking for ideas.

More often than not, we need to let them find us.

The American poet Ruth Stone used to talk of poems barrelling across the countryside, finding her out in a wheat field, and of her running home to try find pen and paper in order to capture them. In a similar vein, the marvellous songwriter, Tom Waits, would tell of cursing songs that turned up when he was speeding along a freeway unable to capture the words or melody, knowing that they may never return and might well continue in their search for a troubedour, perhaps ending up at Leonard Cohen’s feet.

Fortunately, the ideas that sought me out on my walk stayed with me and have now made it in to the revision of the Doctor’s Transformational Coaching Diploma programme and saved me a whole load more chasing.

Whilst coaching, I have the intention of allowing new thinking to be generated in the mind of my client. In order to do this, as a coach, I have to create the space.

It’s within that space that the client’s unconscious does it magical work.

The client might well be talking when the thoughts start to come. They may speak those thoughts out loud; thoughts that had never occurred to them before, or they may pause as their new thinking takes them by surprise.

Alternatively, they may be sitting in quiet contemplation as the thoughts show up and be silent for some time.

However the thoughts choose to show up for our clients, it’s important that we stay out of the way and let them surface and take shape.

We have nothing to add to this process, other than our presence, and our willingness to allow the space to emerge in the moment.

And the thoughts will come, if we just give them space.